Happy almost Thanksgiving! Jesse and I are really excited to have a few days off of work. We ran the San Diego Half Marathon on Sunday, and while neither of us set any records, we had a great time running through America’s finest (and surprisingly hilly!) city and even got to meet one of the running world’s finest – Meb Keflezighi. 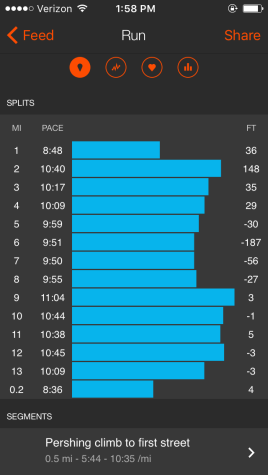 The morning started very early to get to the race start before the gun went off at 6am. We found an Airbnb five blocks away from the start line in downtown. In the early morning haze, neither Jesse nor I thought to bring our phones, so we have no photos of the race (which I kicked myself for, given that we ran the race at a leisurely pace together and had ample ability to take photos). We were in the very long porta potty line when the gun went off, and it felt very strange to cross the start line with the few other stragglers.

Jesse and I ran the first few miles easy and watched the sun come up over a beautiful, soon-to-be 80-degree day. There was a long climb around mile 2 near Balboa Park. Jesse and I kept a steady pace and were stoked for the gradual downhill after the top.

I felt very slow during this event and was happy to be running casually and chatting along with Jesse. The miles ticked by slowly for me during the first half of the race. I haven’t ran more than a handful of times since the Berlin Marathon, and I really felt it. I definitely thought I could get away with running a half on no training, and I did to a certain degree, but I definitely struggled a bit and felt absurdly sore the next day.

Around the 10K mark, Jesse stopped and embraced someone spectating. I figured Jesse found someone he knows (it wouldn’t be the first this has happened), but as the man turned to face me, I realized it was marathon legend Meb Keflezighi! He shook my hands and genuinely seemed to be happy meeting race participants. Meb’s reputation as a class act definitely held up in our brief but poignant encounter.

Energized by seeing Meb, we trudged on as the day starting heating up and as we headed towards the airport and the harbor. I started really feeling the miles and lack of training; we walked through every aid station to drink gatorade and water and grabbed gus when they were available. I trudged on at whatever pace felt comfortable. I was really happy to be running in what felt like summer and excited that we’d be done at 8am and have the rest of the weekend to eat fish tacos and sample delicious craft beer.

We crossed the finish line in what is Jesse and my person worst – 2:14, which is ironic given that you had to qualify to run this race. The race was not the easiest – poor pavement quality in sections, climbs, and steep downhills were not a match made in PR heaven. However, the event was a great excuse to spend time outside on a beautiful day while many people across the country are getting ready to hibernate inside for the winter months. Jesse and I spent the rest of the weekend visiting friends, eating fish tacos, and drinking Stone and Ballast Point beers. We recovered with beach yoga (for me) and surfing without a wetsuit (for him). Last weekend was a true SoCal weekend!