The Berlin Marathon served as the nail in the coffin for me: I’m not going to be running a road marathon anytime soon. Unless the race is in a fun, exotic locale (i.e. Europe) that rewards me with an epic vacation, I’m not going to be training for road marathons in the near future. Although that may sound a bit snooty, I’m just being realistic: the training is too grueling and all of the long, slow miles (when my legs are too sore and stiff to run any fast miles) make me feel out of shape and lethargic, and I know my form suffers as well.

The finish line and the all important Erdinger tent meet-up spot.

That being said, the Berlin Marathon was a whole lot of fun. As soon as we were a mile in, I knew that running the race itself was going to be challenging, but I kept things in perspective: I was very fortunate to be running one of the majors, in Europe no less, at the beginning of a two week vacation.

Jesse already posted all of our good photos, so you get my splits!

I had zero expectations going into this race. My training cycle had been the most inconsistent marathon training cycle I’ve ever had, so I had no idea what my time would be or if a PR was capable (my marathon PR is 4:34 on the hilly SF Marathon course). My strategy was to take the first half as slow as possible at hit the halfway point at 2:10. I achieved this, despite an almost three minute bathroom break stop around mile 9.

At the beginning of the race, I knew I was in for trouble because my legs already felt tired by mile 4. Usually, the first hour of a marathon flies by in the blink of an eye, but I was already counting down miles starting with mile 1. The course itself was amazing – we had a tour of the entire city, and it was mostly flat and downhill. I loved seeing runners beside me representing countries from around the world, speaking dozens of different languages.

After my bathroom break at mile 9 and hitting the halfway point in about 2:10, I felt toasted. My foam began to suffer and my gait slipped into more of a shuffle. I walked through nearly every aid station and made sure to gulp down as many calories as possible through their electrolyte drink. I tried hard not to get discouraged as I watched a PR slip away, so I instead focused on continuing to run and move forward, even as many people around me started to walk.

The last 5K was grueling – we ran by our hotel, so I knew exactly where I was in relation to the finish line, and the last bit was an out and back. I did everything I could to shuffle ahead, and I didn’t stop to walk or drink water at any point (I knew stopping would just prolong the suffering at this point). Making the final turn to face the Brandenburg Gate and the finishing shoot took my breath away (literally and figuratively at this point). The crowd’s roar pumped me up and kept me going for that last .25 mile.  I crossed the finish line in 4:43, not my faster, but not my slowest (by a minute, 4:44).

Once I finished, I was in a serious amount of pain, but my one goal was to find Jesse at our agreed upon meeting point by the Erdinger beer tent. Seeing his smiling face holding a beer was a serious sight for sore eyes – I could have started crying in relief. I was also very happy to hear he PRed and had a great race, despite some struggling toward the end.

After the race, we hobbled back to the hotel, showered, and went to a nearby restaurant for some beers and snacks. Surprisingly enough, I wasn’t as sore as I usually am the next day. We (slowly) walked several miles, visited the DDR museum (highly recommended if you love Cold War history), and took a very relaxing boat cruise down the Spree River.

The marathon distance has not suited me well since my first marathon in 2012. Despite my 10K (49/50 minutes) and half marathon PRs (1:54), I’ve failed to run the 4:10 marathon predicted of my finishing times for the shorter distances. This marathon training cycle taught me that I really love shorter distances, and there’s nothing wrong with that. I’m already setting my sights on some big PRs for next year. Instead of the long, slow slogs, I plan on running much shorter and faster workouts with longer distances on the trails.

After recovering for a day in Berlin, we headed to Oktoberfest, which was an incredible experience. More posts on our vacation are in the works. Prost! 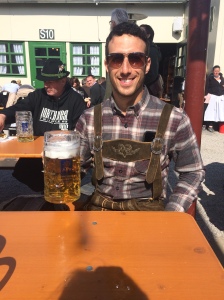 Jesse managed to borrow Lederhosen from a friend in Berlin for Oktoberfest.