I’ll cut to the chase: I crushed Vineman 70.3. After spending 10+ weeks on the sidelines due to a broken foot, I was cleared in time to log 10 solid weeks of swim/bike training, and capped the comeback with a 5:26 half ironman:

I PRd the swim by 2 minutes, bike by 5, and narrowly missed a new 70.3 PR by 7 seconds. Between the injury and my relative lack of fitness, matching my PR from last year when I was in top shape is a major win. Here’s how it went down: 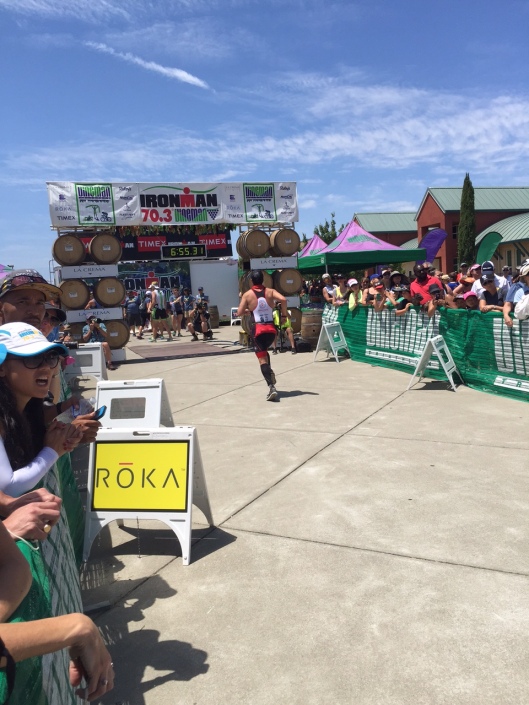 At the end of a long road back

Despite the injury, I’ve swam a lot this year, and it really came together on race day. In years passed, I’ve dabbled in different approaches to swimming: I followed a plan written by my coach at the time, researched specific swim workouts, and swam for fun without a prescribed workout in mind.

This season has been different so far; I’ve tried a new approach – an evolution of my own trial and error. I’ve tried to swim like I run: my ideal running plan has a speed workout, pace workout, and long run every week, so why not try it for swimming? I’ve seen good improvements in both speed and endurance in recent weeks, and the practice paid off on Sunday. 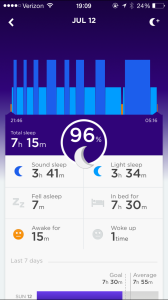 I slept very well on Saturday night, logged a solid pre-race warmup, and was ready to rock. I swam conservatively with an emphasis on sighting and efficiency on the way out, I pushed hard on the way back. Unlike swims past, I didn’t check my watch – not once. I focused on mechanics, swimming in a straight line, and controlled breathing. By the halfway point, I had caught up to swimmers 2 waves (10 minutes) ahead of me, and knew it was going well. I was pumped to exit the water 2+ minutes faster than last year.

The bike leg was a balancing act for me this year. Unlike last year where I was dead set on hammering my way to a massive PR, I knew that any hard efforts on the bike would lead to a bigger deficit on the run. Running 13 miles after getting cleared to resume normal running 3 weeks prior was a tall order, and doing it off the bike made matters worse. 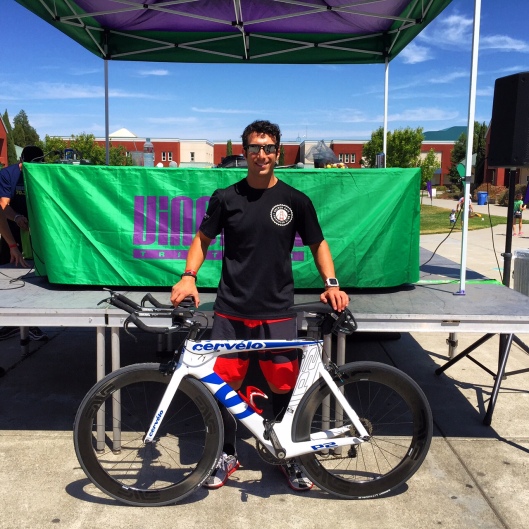 All checked in and ready to crush!

Instead of relying on brute force, I shaved time conservatively and strategically. I rode the course twice leading up to the race: I knew where to push, and where to hold back. The second half of the course has traditionally given me trouble, and I practiced holding back on the first 30 fast miles so I could make a late surge. I rode comfortably around 22 mph and felt extremely strong all throughout.

I nailed both my riding and fueling strategies, and rode as well as I could have. My fastest split was miles 30-40, and I rode miles 50-56 slightly off my pace from miles 1-10. Most importantly, I had a blast doing it. The weather was perfect: 75 and sunny, as I cruised through Vineyards at 20+mph. If you’re on the fence about racing Vineman 70.3, just do it – it’s worth the trip. The roads conditions have noticeably improved in the past couple years, and the course is extremely friendly to all-around riders who enjoy rolling terrain; sign up and don’t look back – just don’t take my spot!

As I posted last week, I tried really, really hard not to think about PRs or time goals throughout the course of the race. I snuck a peek at my elapsed time once I dismounted my bike, saw ~3 hours, and knew that I could have made a serious push for a sub-5 hour finish if I was in running shape. Instead, of getting sucked into the negativity and what could have been, I focused on the moment and putting forth my best effort on the run.

When I raced Vineman Monte Rio on May 31, I still wasn’t cleared to run more than 5 minutes without walk breaks. I was eventually cleared to resume full running just over 3 weeks ago; needless to say, my expectations for the run leg of a half ironman were not high. Leading up to the race, my long runs consisted of a 6, 7, and 10 mile long runs; 10 felt extremely difficult at the time.

My easy pace plummeted from ~7:30 pre-broken foot to ~9:00 – no surprise there either. The realist in me knew that running at an easy pace for 13 miles was my best case, so that’s what I did. I focused on form, posture, and breathing out of the gate, and ticked off a few miles in the low 8s. The weather cooperated – the temperature hovered between 75-80, and I dialed in on nutrition and hydration.

My foot didn’t bother me at all. My legs felt noticeably weaker than they have in races past, and I chalk that up entirely to the injury. I ran strong for the first ~8 miles, but simply didn’t have the muscular endurance to hold it together – my mantra was “give it your best without being stupid”. Walk breaks helped me refuel and recharge, but I didn’t have the running legs to push harder than I did. There’s a lot of season ahead, and finishing Vineman strong and healthy far outweighed the consequences of overdoing it.

I saved just enough to run hard for the final half mile leading up to the finishing chute, and was so relieved to finally fnish. After coping with a tough – albeit short bout with injury, getting back to fitness left me feeling proud and satisfied with a solid, smart effort at Vineman.

Now that I have a big race under my belt, my confidence is much higher, and I’m looking forward to ramping up my running ahead of Berlin Marathon. Onwards and upwards! 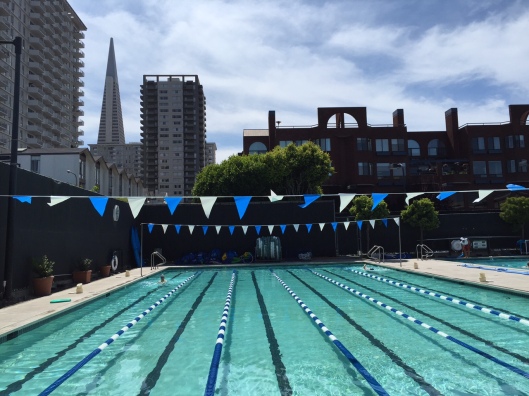 Enjoying breakfast with Taylor in Jenner! 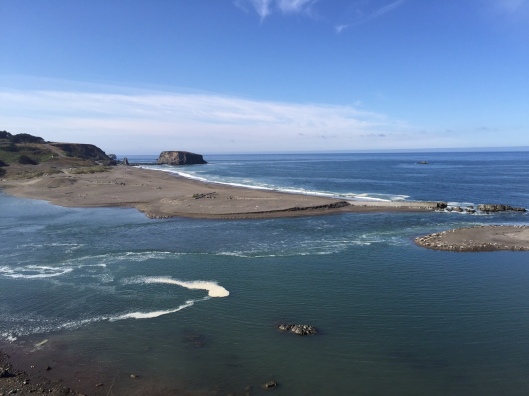 Soaking in the view from Jenner 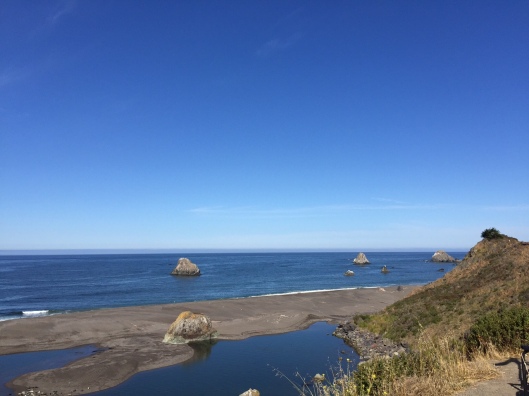