We’ve had a bit of writer’s block at STM – apologies for the lack of blog posts during the last two weeks.

With Jesse back on the saddle and looking to be cleared next week to run on the soft, squishy track surface, I’m excited for him to join me for more running workouts.

Scene from this morning’s run on the Embarcadero.

Unlike Jesse, whose body loosens up immediately upon 15 minutes of stretching and who can make great gains in fitness with a few targeted workouts, my recovery and improvements are much more glacial. I’ve added purposeful speed workouts into my running regimen in hopes of reaching my half marathon time goal. I really want to run a 1:55 at Mountains 2 Beach Half Marathon next weekend, and my 49-50 minute 10K at the Silicon Valley Turkey Trot indicates I’m capable of running as fast as a 1:50!

Generally, if I don’t like doing a running workout, I should do it because it’s good for me. While I love running 400m repeats and low, slow distance runs, longer efforts closer to threshold are key to improving speed, despite my protests at running fast at 6am.  Last week, I ran five miles with three at tempo pace, and this morning I ran four 800m repeats. 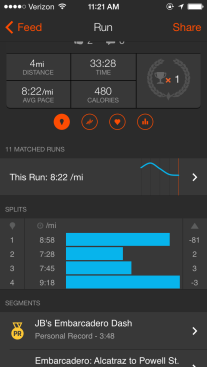 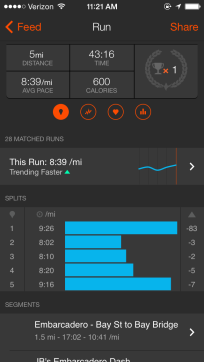 I’m hoping this hard work pays off next weekend! After a very successful 12-miler last weekend, I’m hoping I can run a similar easy run this weekend. I’m getting massaged on Tuesday, and then Jesse and I fly to SoCal on Saturday for Sunday’s race. Depending on what the doctor says, he may be joining me for the half!