The past two weeks of training have been amongst my strongest – ever. Between my bike volume (~200 miles last wee), quality, and running speed, I can’t come up with many weeks that have come close to my recent workouts. I set out for a pre-dawn Ninja Loop run with some friends yesterday morning; little did I know, that was my last workout for some time: I broke my foot on the first mile of my run. 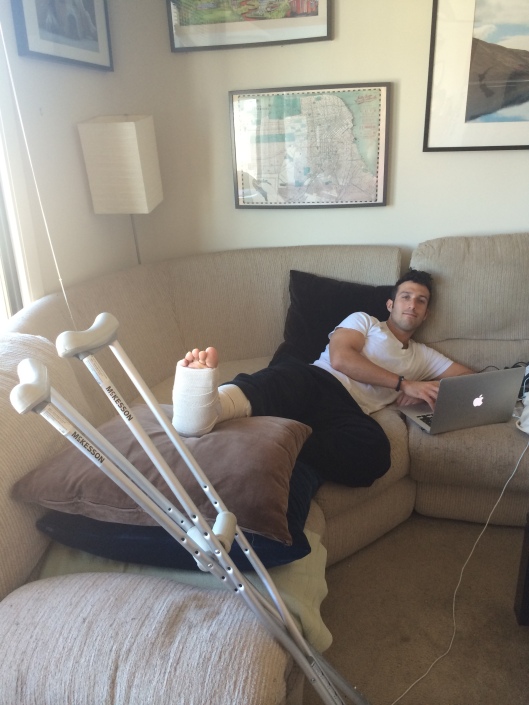 I wasn’t doing anything crazy or irresponsible – I was running uphill at a ~11:00 minute/mile pace and simply landed poorly. I rolled my foot severely – I don’t think the platform height of my Hokas helped, and immediately felt my foot break. I also heard it snap, and I knew that it wasn’t something I was going to walk off. I waved my friends on and slowly made my way back to the car. Driving to urgent care was no small feat – I could barely apply pressure on the gas and knew that I had to get off the road soon.

By the time I arrived at urgent care, my foot was huge – I had a massive bruise and lump forming over the area that I believed was broken, and asked for a wheelchair instead of crutches. The x-rays confirmed what I’d suspected – I broke my 5th metatarsal in three places.

I’ll be back soon

After I was casted and ready for discharge, I reached out to a few friends in medicine and managed to get an appointment at a top-notch orthopedist who specializes in foot and ankle injuries. Taylor and I went to see him in the afternoon and I got some good news: the 5th metatarsal isn’t displaced despite the break in three places, and I have an avulsion fracture which typically heals much better than the dreaded Jones fracture. I most likely will not need surgery – if the bone stays put for the next week, I should be able to switch to a walking boot instead of the hard cast.

In terms of recovery, the orthopedist expects that the bone will heal in 60-90 days, and I should be able to ramp up my activity at the 90 day mark. In the near term, I should be able to ride the stationary bike in the next 2 weeks depending on how my next appointment goes. As far as races go, Way Too Cool 50K is a definite no (March 7th) and I’m not really setting any expectations past that. I simply want to get back on my feet and salvage part of the season.

Morale of the story: accidents happen, even when you’re taking precautionary measures. I’m glad that I’ve had an excellent string of results and managed to spend a better part of the past 5+ years injury free; I’ll get back out there soon.

64 thoughts on “Scheduled Downtime: I Broke my Foot”

Leave a Reply to Running Boston and Beyond Cancel reply