In the wake of the Ironman Lake Tahoe cancellation, Jesse was determined to “redeem” himself by running another challenging race despite the race cancellation being out of his control. Although his Ironman 2015 plans have yet to be determined, we have running races on the docket that are sure to keep Jesse and me busy.

While sipping some delicious Belgian ales and watching our new favorite show, the Good Wife, on Sunday, we began perusing races (marathons and ultras) held during the next six weeks and stumbled upon the trail Skyline to the Sea Marathon and 50K on October 11. 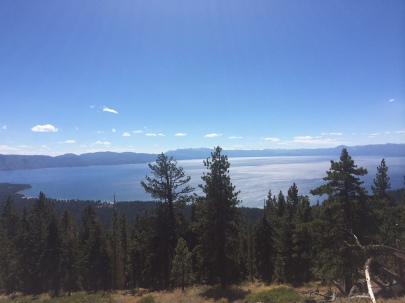 Hopefully Skyline to the Sea’s views are half as epic as this shot from the Tahoe Rim Trail.

The Skyline to the Sea marathon is quite close to my hometown of Los Gatos and the views of the Santa Cruz mountains and the ocean are reputed to be breathtaking.

Glorious downhill elevation for Skyline to the Sea.

Although this race schedule may not seem like the smartest idea in the world, I plan on running all of these events “easy,” with my goal race being the North Face Endurance Challenge 50K. However, I definitely signed Jesse and I up for another race (in addition to the Mt. Tam Trail Run on November 15) – a Turkey Trot! The Silicon Valley Turkey Trot is the biggest turkey trot in the country, and I feel obliged to participate on Thanksgiving due to our proximity to this race in downtown San Jose.

With lots of sleep, rest days, stretching and foam rolling, and massages, I’m convinced I’ll make it out of this stretch of races happy and healthy.