Taylor and I knew the month of August would be a crazy one before it even started. Judging by the look of our trusty Australian Shepherd wall calendar, each weekend was jam packed with either a race, social event or trip. The Town’s Half Marathon marked the last of the races, and we both approached the race as a priority “Z” event – the first of its type. After we received confirmation that we were both chosen as ambassadors, we simply wanted to participate in the inaugural event and have fun in the process. 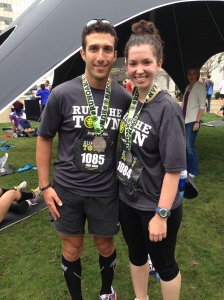 PRs and spinner medals for everyone.

In the week leading up to the race, I was undoubtedly feeling disillusioned about biking and my upcoming A-race, Ironman Lake Tahoe, following my crash in Tahoe last weekend. I hoped that the training weekend would mark the culmination of a month where I set a new Half Ironman PR, climbed the podium at Vineman Full Aquabike, finished Marin Century in style and felt great at San Francisco Marathon. Instead, I was reminded that biking is inherently dangerous, and that reality is a dish best served cold. I didn’t get on my bike at all last week – it’s getting a full tune and some new components at the shop. Instead, I got a massage, rested for three days, did what felt good, enjoyed an amazing Paul McCartney concert, and mentally prepared to run well on Saturday.

Despite only logging 5 hours of sleep on Thursday night following the Sir Paul concert, I knew that my body was in good shape during my shake out run on Friday morning. I broke into a 10k pace with little effort, and immediately ended the run once I knew I was ready to go. 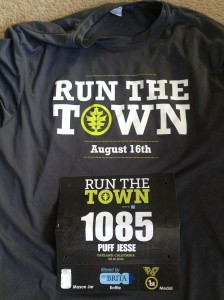 Check out the custom bib.

The race started early – 7am, and we were up bright and early to make it on time. We had plenty of time to warm up and chill out before the starting gun. When I saw that the 1:45 pace group was pushing all the way up to the front of the corral, I knew that I was in for a first – I started with the lead pack. Resisting the temptation to chase rabbits, I pulled back after noticing that I was running a 6:15 pace, and comfortably logged my first mile in 6:47. I felt Good – good enough to start thinking about a PR from mile 2. 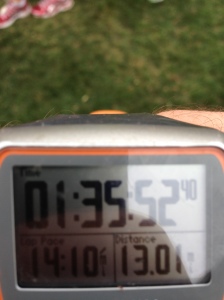 The wheels started to fall off soon after – miles 7-9 had some short but steep hills – both up and down, and it was difficult to sustain my desired stride and pace. I had a burst of energy around 9.5 when I hit a flat, fast section, but it was short-lived – Lake Merritt was the most difficult segment of the course in my opinion. There were a lot of quick, short turns that meandered around the 5k loop, and I had a very hard time getting in my rhythm – especially when I was feeling fatigued at the end of a hard race. I took a brief 20 second walk break to gather my bearings and chug some electrolytes at mile 12 – I wanted to finish strong. My final push wasn’t quite enough to break 1:35 – a long term goal that I didn’t expect to approach until next season, but I finished in just under 1:36 – good enough for a 2 minute PR.

Between the bike accident last weekend and the lack of focus I’ve placed on running this season, this one felt particularly sweet. I’ve already decided against an Ironman in 2015; instead, I’m planning to hone in on a sub 1:30 half marathon along with a big PR marathon in Berlin. Although I’m not quite ready to make the push for a BQ just yet, it’s quickly becoming a realistic goal with each and every PR. 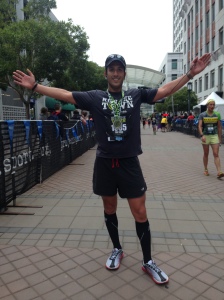 31 thoughts on “Race Recap: The Town’s Half Marathon – PRs All Around”