It’s hard to believe, but Ironman Lake Tahoe is only 5 weeks away. It started with an innocuous mouse click while I was in Copenhagen on business last fall and has since turned into a 6+ months of focused training. Part of my plan all along was to get up to Tahoe and train on the course, and I finally got my chance last weekend.

Taylor and I left San Francisco after work on Friday night and narrowly missed the traffic – we made it to Tahoe and settled in shortly before 10pm. We rented a great house on Airbnb with 4 others along with a really cute cat named Sweety. After saying a quick hello to everyone, we went to bed early knowing that my 112 mile course ride was set to roll at 8:00am.

Although the true bike course starts at Kings Beach following the swim, we opted to start at Squaw Valley for logistical purposes. The plan was to ride two loops of the course and run for 30-40 minutes immediately after. We rolled out with little fanfare and many cars on the road – even early in the morning. I was reluctant to ride aero and was alternating between aero and upright for a better part of the first 10 miles; the traffic undoubtedly bothered me. 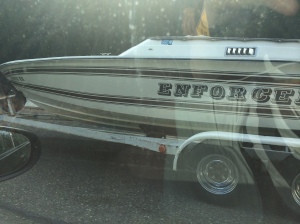 My future boat / my source of headaches on the bike course dry run.

I rode the first 10 (slightly downhill) miles easy and was pleased to see that I kept a 23.5 mph average without hammering. After a baby climb roughly 12 miles into the ride, something felt off – my saddle became dislodged. The saddle tilted backwards and the nose pointed upwards – it was an easy fix, but I had a hard time finding my ideal position again, and still need to adjust it properly.
By that point, the group had moved on and I was riding on my own. I typically have a great attitude on the bike, but I was not feeling it – between the cars, the 50-55mph speed limit, my mechanical problem and the fact that I was set to ride solo for another 90 miles under those conditions, I was not having it.
I climbed through Northstar easily and made the right up the infamous Brockway Summit climb. As expected, it was quite tough – ~3 miles and ~1000 feet of gain starting from over 6000 feet will do that to you. I crested the descent, and that’s where things went south – fast. 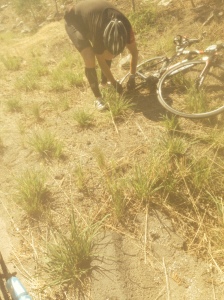 I still don’t know exactly how it happened, but long story short – I suffered a full blowout on the descent when I was going over 20mph. My bike went sideways, and I somehow managed to unclip, jump over the handlebars, land on my feet and break into a full running stride; I never hit the ground. Two of my friends witnessed the crash from start to finish and were visibly upset afterwards. I think the adrenaline suppressed some of my emotion – I didn’t fully grasp the severity of the crash until hours after the crash when my adrenaline crashed. It was extremely traumatic.
I hopped in the SAG truck and called it a day – 30 miles and ~2200 feet of climbing into the ride. I was happy to be safe. 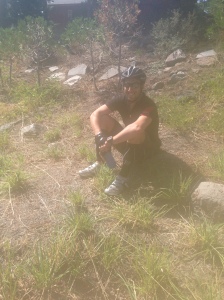 Cracking a smile after averting disaster

Sunday was much less eventful in a good way. The group went out for a 30 minute open water swim in Lake Tahoe, and it was nothing short of amazing. Taylor enjoyed her first non-race open water swim in pristine fashion – the underwater visibility was essentially unlimited, the water was in the high 60s, and there was minimal chop. 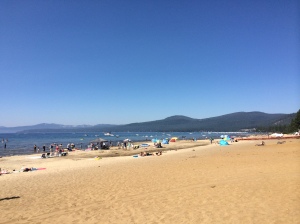 We shuttled over to Squaw again for a long run on the course – also uneventful in a good way. I’ve spent some time running at altitude, but never in the summertime. I found it much easier to breathe in the summer, but I was roughly 20-30 seconds off my long run pace regardless. I ended up running 16 miles at an 8:25 pace – roughly a marathon effort, and was very pleased with the run. Perhaps the most interesting part was my sweat rate and the salinity of my sweat at altitude – my visor was caked in salt by the time I finished running, and I’ll need to fuel accordingly at IMLT.

Gassed after the run. 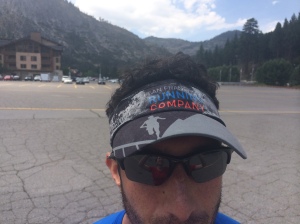 For now, I’m going to take a short break from biking – especially because I need some repairs, and put the crash behind me.