As the name of our blog suggests, Jesse and I love trail running. However, with all of his Ironman Lake Tahoe training and my marathon training, we’ve had little weekend time to hit the trails. In fact, until yesterday, we hadn’t run on the trail since the Coastal Trails Horse Shoe Lake Half Marathon in May.

We discovered the road that leads to the Tennessee Valley trailhead, an area most frequented by us during trail races like North Face, and planned to run out to the Coastal Trail and turn around at Muir Beach.

Running down the stairs on the Coastal Trail.

We ran our eight-miler fairly slowly, as Jesse had participated in the Marin Century Ride on Saturday and I’m still testing out my post-DNF legs. Running in my new awesome new Brooks Cascadia 9 trail shoes that Jesse had so kindly bought me felt great. Although the views of San Francisco were less than impressive than usual due to Karl the Fog‘s occupation of the bay’s skies this weekend, breathing in the fresh air, listening to the ocean without any traffic or street noises, and running on the dirt felt refreshing for our minds, bodies, and souls.

Hoofing it to the top of the Coastal Trail. 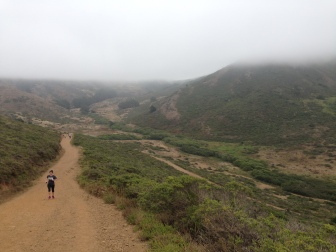 21 thoughts on “We Love Trail Running”