As a way to avoid Bay to Breakers debauchery, Jesse and I escaped San Francisco to run a trail half marathon – the Horse Shoe Lake Trail Run off Skyline Boulevard near Palo Alto. After running another Coastal Trails race, the Montara Mountain half in February, we jumped at the opportunity to skip out on the drunken tomfoolery that is Bay to Breakers in lieu of exploring a new trail, running a trail half (our favorite type of race), and kicking off marathon training for the SF Marathon.

We both decided this race would be less of a race and more of a long training run. As you know, Jesse’s been putting in lots of mileage lately, between last Monday’s 14-miler and Saturday’s 56 miles on the bike. With my hesitation to start training for Vineman, I was excited to spend time outside and away from the most arguably chaotic day of the year in San Francisco. Looking at the course’s elevation profile, I knew there would be too much elevation on the course to come close to my trail half PR achieved at the Great Race. 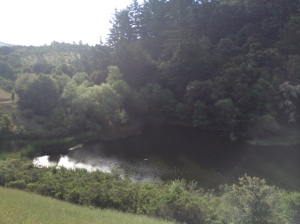 The lake part of the race’s name

The morning was cool (Skyline and Highway 280 are often shrouded in fog, especially in the morning), but the fog quickly burned off and turned into a beautiful morning. Thankfully, the course provided plenty of shade, helping me avoid the sunburn from hell, part 2. This out-and-back course was HILLY and scenic. The Santa Cruz Mountains, Christmas tree farms, and redwood trees provided much to look at and turkeys clucking somewhere out of view gave the course a very rural soundtrack. While running to the 6.5-mile turnaround, you climb and descend steep hills twice, with this reversed on the way toward the finish line.

I took this course slowly, preferring to walk when the hills became too steep or the footing too slippery. When I was around mile five, I saw Jesse fly by me in the top 10 finishers. After the turn around and eating a gu, I felt strong on the descent down to the canyon floor and passed several other women running near me.

Once I crossed the finish line and took a minute to recover, I asked Jesse about his two medals. Turns out, he finished second in his age group and eighth overall. I’m so proud of him for taking this race “easy” and still finishing so high in the ranks.

Although race results haven’t been posted, I think I finished right around 2:40, which I’m perfectly happy with given that I went into this race with no goals. This morning, I opted to sleep in a bit and take my parents’ border collie, Colleen, for a walk. We get to dogsit again!

My legs are very tight, and my deep tissue massage tomorrow could not come at a better time, but I would definitely run Horseshoe Lake Trail again.