A recent, albeit rare string of rainstorms has left Bay Area skiers thrilled (Lake Tahoe received 8+ feet in February!) at the expense of triathletes who braved the January – resolutionaries and all.  Heading into the weekend, Taylor and I were cognizant of the recovery week following Montara Mountain Half Marathon and our first three weeks of triathlon training, but also eager to catch up on our outdoor cycling.  Unfortunately, mother nature didn’t cooperate on Saturday, so we shifted our scheduled long bike to Saturday in favor of an easy 80-minute run – 50% on, 50% off road.

Perfect backdrop for our next horror movie entitled “The Rest Week”

We both had very low expectations heading into the run.  Taylor’s been down with a cold, which was today confirmed as a sinus infection, and I somehow managed to aggravate the foot/ankle injury that I suffered leading up to Quad Dipsea.  Although I didn’t cut my bike or swim volume – neither are weight bearing, I did stay away from the prescribed slow, short runs (30 minute) this week to expedite my healing.  Luckily, we managed to catch a break in the storm and a beautiful run along the water – starting at Chrissy Field, up and down the Coastal Trail past Baker Beach, and eventually all the way to Lands End over by the Pacific Coast.  The lighting was absolutely beautiful, and although neither of us were at our best, it was probably best that we held back ahead of the increased volume this week.

Schizo Baker Beach – the cloudy half 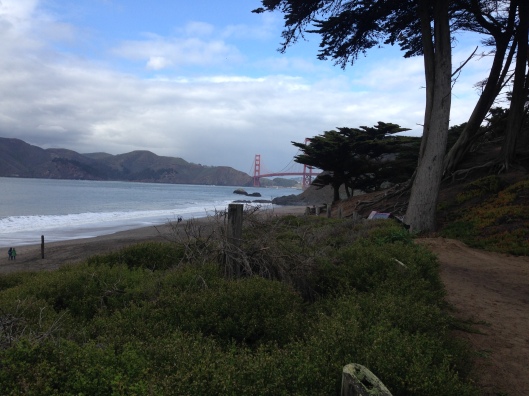 The forecast called for a nice(r) day on Sunday, however we were greeted with ominous gray skies and rain when we awoke.  Although Wildflower is rapidly approaching (8 weeks!), we both decided that a long-ish ride (2.5 hours) indoors was the lesser of two evils, and off we went to our respective gyms where our fellow San Franciscans gave us a firsthand look at Lululemon’s spring 2014 collection.  Despite the relative low intensity of our workouts, we still managed to log a solid 4 hours of training – almost as much time as we spent serving as makeshift Oscar/runway pundits with Taylor’s family last night.  Even though rest days are enough to make me stir crazy and rest weeks are practically solitarily confinement, I know that slamming on the brakes for a few days now will help me speed for weeks later in the season.

Can you spot the rainbow on the top right?