Polk Street represents the highs and lows that make San Francisco famous (or infamous). From the the northern section of Polk Street, beautiful vistas of the Golden Gate Bridge, Alcatraz, and the Presidio hike up the rents for the yuppies and techies who live there. Restaurants, bars, and boutiques line the bourgeois street. As you meander down Polk Street, away from Russian Hill and Nob Hill,  Polk Gulch beckons. Vagrants sleep on doorways and people look like they’re up to no good as you move closer to (ironically) the heart of the City’s government, City Hall. 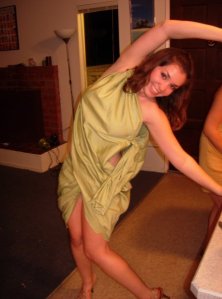 Two hot yoga studios compete for business on Polk Street. California Yoga Company, sitting pretty in Nob Hill, is hot yoga but differentiates itself from other hot yoga, namely Bikram classes. Owner/instructor Brian Monnier taught most of the classes I took, and he made a huge difference in my yoga practice, giving modest adjustments that made a world of difference. Some postures from which I never fully felt the stretch made me feel more limber when he showed me what the posture should feel like. This studio is expensive – $18 for a single class or $80 for a package of five classes. I bought a Living Social deal for two months unlimited for $40 and it was well worth it. The yoga studio is heated but not unbearably so; the temperature felt about 85 – 90 degrees.

Classes are an abridged form of Bikram. Most of the standing postures are done twice, like in Bikram, but are supersetted or done out of sequence. The hour-long class also includes an abs segment, which I’m sure was carved out to appeal to the clientele. California Yoga Company’s studios have no shower or classes earlier than 7 am, so it doesn’t bode well if you’re trying to hit up a class before work. Like Bikram, this class has the same format and sequence every time.

Funky Door Yoga is located in the TenderNob, a seedier atmosphere that’s reflected within the studio. It’s a little run down, with the odor from the yoga studio lending to its “funky” name. This studio is fairly priced – I bought a 10 classes for $40 deal from Groupon. Teachers are your standard fare Bikram; they make no adjustments but call out postures. I spent a good amount of the class looking at the cartoon-ish photographs of people practicing each posture lined up along the wall near the ceiling. The studio gets very hot and stuffy, which is common is most hot yoga studios I’ve visited.

The studio has two showers and lockers. I only went to the 6 am classes and one class on the weekend, so I can’t speak to how crowded I’ve heard the class is during evenings.

If you’re looking to expand your yoga practice, head to California Yoga Company where Brian can help you explore your limits and improve your postures. If a standard Bikram class is what you’re looking for, Funky Door Yoga will definitely suit your needs.