June 2008: I was a few weeks out of grad school, fresh on my first job in New York City, and resigned to a two hour commute until I could save enough money to move out. Until then, I was determined to make the most of my surroundings, and proceeded to eat every home-cooked meal I could (my mom specializes in apple-based desserts). Not long after my transition to real life started, I was given a huge boost: my best friend and next door neighbor came home from college for a couple months. Growing up, we tried our best to set a new goal for every summer, which usually meant going places or trying new things, and this summer would be no different.  Andrew was a lifeguard, I’d tried my hand at running the 2008 New York City Half Marathon in basketball shorts, and we both had mountain bikes – why not make 2008 the summer of triathlon? 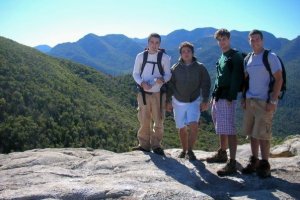 Andrew and I hiking in the Adirondacks – summer 2007.

SBR NYC – a popular triathlon store in New York City, sponsored not one, but two sprint triathlons at Harriman State Park in June and August, and we were convinced that we had the fitness base to carry us through either.  I will be the first to admit it – we had absolutely no idea what we were doing.  Our training consisted of impromptu swims across small rural lakes without wetsuits, steam room sessions with a few laps afterwards, mountain bike rides alongside busy roads, and walk/runs that rarely exceeded three miles.  Neither of us wanted to admit it, but we were nowhere near race-ready in June.  On the eve of the big race, we debated how prudent it’d be to attempt our first triathlon over beers and a campfire.  The race didn’t happen.  Fast forward to August: we were a few more weeks into our ‘training plan’, a few beers into our pre-race ritual around the campfire, and a few hours into our debate around whether tomorrow would be the day – it didn’t happen.

Finally, we opted to register for the ITPMAN Triathlon – a 800 meter swim, fifteen mile bike, and five mile run in late September.  We took a more structured approach to training, agreed to cease our campfire ritual, and felt well prepared the morning of the race.  I tested a coworker’s multicolor, decade-old surfing wetsuit in an upscale NYC pool to stunned onlookers, we talked about our transition strategy, and agreed that no matter what, we would stick together and finish what we started.

My mom, an avid marathoner, made sure to get us up and out by 4am.  We toed the line aiming to get out of the water and focus on nailing the rest.  The swim went off without a hitch, but Andrew fell behind not long into the bike.  It soon became painfully evident that Andrew didn’t check his tires before the race, and both were flat.  If riding janky mountain bikes during our first triathlon through wealthy Connecticut suburbs wasn’t bad enough, our frustration was compounded when course aid didn’t have an adapter for pumping fat-tire bikes.  Nevertheless, we soldiered on, cursing at each other, and getting passed by everyone.  Seriously.  By the end of our bike ride, the course was almost closed.  We got into T2 only to be greeted by finishers, who we humbly asked to direct us to the run course.  We came in second to last, and dead last that day – a seventy-five year old man completing his first triathlon edged us out for third to last.  We nailed it!

I don’t recall saying a word to Andrew while we were on the run course.  I obnoxiously ran ahead, and backtracked to him so I could “push” myself while he chugged along after riding a flat-tired bike for a couple hours.  My mom wanted to celebrate and take pictures at the finish – we demanded to get in the car and go home.  My mom asked us what happened – silence.  After a few beers, we half-heartedly forgave each other, and in our typical competitive fashion, the conversation soon shifted to  “I could have finished this much faster with a working bike”. 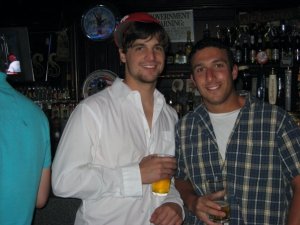 Looking back, I wouldn’t have it any other way.  I bottomed out on my very first attempt, so the pressure was off.  I learned to laugh at mistakes, remain light-hearted when faced with adversity, make a pre-race checklist, and travel with an air pump wherever I go.  When disaster struck at mile twenty of the Ironman Lake Placid bike course and I almost lost the aero bottle carrying my fuel for the first loop, I calmly flagged down bike support, asked for a spare tube, and jerry-rigged it to my bike frame.  In fact, next time Taylor’s all packed for the gym the night before and waiting on me to scramble out the door in the morning, I’ll remind myself why I pump my tires before every ride.