As I mentioned in an earlier post, I’ve been eyeing Ironman Lake Tahoe 2014 as a potential return to Ironman training and guilt-free banana split indulgence.  Despite my affinity for cold water, I view the swim as most daunting leg of IMLT.  After a strong swim at Escape from Alcatraz 2011,  I expected  to breeze through a shorter swim in (much) calmer and (much, much) warmer water at Ironman Boulder 70.3.  I was in for a rude awakening.  Although my swim fitness had never been better, the altitude made my heart rate skyrocket, and I found myself holding onto a kayak 200 meters into the race.  Much to my surprise, I wasn’t alone, and took solace in finding a fellow sea-level dweller clinging onto the starboard side.  My pre-race anxiety coupled with the spike in my heart rate at the swim start was only compounded by the altitude, and my performance ultimately suffered.

In May, Ironman launched a new initiative called SwimSmart aimed at promoting open water swimming safety, reducing anxiety, and increasing athlete satisfaction during the swim leg of future Ironman and Ironman 70.3 events.  I learned about the initiative firsthand at Ironman Lake Stevens 70.3 when I swam by numbered buoys every 100 meters, and found it to be very helpful on race morning.  The course was shrouded in fog, and it was difficult to sight past 100 meters; measuring my progress using the numbered buoys ultimately kept me calm while ensuring that I paced evenly. 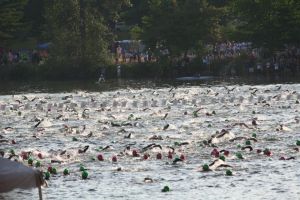 Just last week, Ironman announced a change to the IMLT swim start, and they’ve opted to implement a rolling start instead of the mass start that’s been the standard for many full Ironman events.  When I’m asked about my swim experience at Ironman Lake Placid 2012, I often frame it as a seal stampede – a mass exodus of 2,700 bodies in a narrow body of water.  Athletes were permitted to seed themselves, which resulted in some weak swimmers in the front of the pack in an effort to chase the elusive underwater sighting cable, and some strong swimmers seeded toward the rear with no choice but to swim over their seal brethren.  Ironman Lake Placid 2013 race featured a rolling start for the first time, and I think it’s a step in the right direction.  I’m excited to see how the IMLT swim pans out as well.  Who knows – maybe I’ll even post a follow up next year to review my experience hanging onto the kayaks at IMLT 2014.

The following list highlights the key changes that have been instated for 2013 pilot races:

4 thoughts on “Rolling in the deep”