The triathlon season is just around the corner. Whether you’re planning your race calendar, choosing a coach, selecting a new distance or simply looking to compete in your first triathlon, there’s a plethora of resources to help you get started.

When I raced my first sprint back in 2008, I admittedly lulled myself into a false sense of security by reminding myself that “it’s only a sprint” or “that won’t happen to me”. I didn’t do much, if any research; let’s just say I wish I did more before my first race. That said, I wanted to share some not-so obvious tips that I wasn’t privy to when I first TRIed:

Running a few miles with Taylor at her first triathlon

1. A good bike fit is better than any aero gear you can buy. I remember being incredibly intimidated by the throngs of people who rolled thousands of dollars worth of bikes into my first triathlon. I thought that it was a handicap, and that I would never approach their speeds without similar equipment at my disposal. While that’s partly true, I soon realized that some of the people riding super bikes with deep dish aero wheels and alien helmets didn’t get their bikes fit. What good is all that gear if you can’t hold a proper aero position?

My recommendation: buy an entry level road bike, get it fit (most shops will include fitting in the purchase price) and squeeze the most out of it until you’re ready for Ironman. I rode my entry level road bike exclusively up until my first Ironman when I switched to a time trial bike. 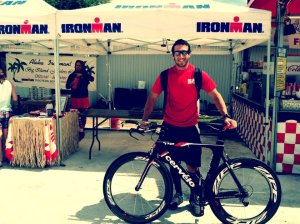 Not what I was riding at my first race

2. Don’t put too much stock in everyone else’s training plan/volume. I admittedly drool over the volume that some people manage to log on Strava. I also know that although I’m a resilient athlete, I start to break down when I run more than 40 miles per week – regardless of how much I’m swimming or biking I’m doing on the side. I know some sub-5 hour half Ironman athletes who rarely run more than 15 miles per week – everyone’s different.

When you’re first starting off, you may not know your limits in any or all of the sports, so ease into it. If you’re feeling good at the end of the first week, crank it up slightly the next week, rinse, and repeat. Remember to step back every few weeks – give your body a week to adapt to the increased training load.

3. Log your activities. I admittedly didn’t start doing this religiously until around May 2014. Taylor has always been diligent about this – she started with a paper planner and has since made the leap to Strava, but journal of sorts is a great way to track your progress.

We’re huge fans of Strava, and the best feature in my opinion is the ability to gauge your progress over common routes over time. Give it a try. Even if the short term benefit doesn’t seem apparent, you will collect a wealth of data that you could use to see just how far you’ve come since you first TRIed.

4. Join a club. Another thing I wish I did sooner. Social outlets aside, my club sponsors several training programs ranging from Olympic up to full Ironman and caters to all skill levels. Some face time with a coach would have been extremely valuable when I first started – not to mention access via email. Group rides are arguably the biggest upside in my opinion: you get to explore uncharted territory in the safety of a group under your coach’s supervision. If you don’t have a triathlon club nearby, fear not: coaching companies like purplepatch are starting to promote virtual training squads: http://www.purplepatchfitness.com/guided-training/tri-season

5. ALWAYS check your gear the night before the race and on race morning. Some of you may remember the story about when I came in dead last in my first triathlon because I stuck with my buddy who had 2 flat tires. Don’t be that guy! Gear problems happen, and you always see people scrambling around transition on race morning. Take the stress out of it by having your bike tuned a week before the race, and perform any last minute tweaks to your gear at least 24 hours before the race.

The curious case of the accidental PR.

6. Don’t set ANY time goals for your first race at a new distance. This one was probably the hardest for me. Like I said in point number 2, it’s silly to put too much stock in someone else’s training. I came down really hard on myself for missing a sub-6 hour finish by 15 minutes at my first half Ironman and again a few months later when I ran a 4:04 at NYC Marathon. In hindsight, it was foolish. How can you accurately predict and hold yourself to a finishing time without ever trying the distance or course?

Go out there and have fun. If you need to set a goal, make it a small one – for example, ride 10 miles of the bike course at a 20mph average pace, or run at least one sub 8 minute mile off the bike. I’ve had much more fun with races since I stopped drilling myself about finish times, and even posted a handful of PRs in training races last season. Enjoy the ride.

20 thoughts on “Things I Wish I Knew Before I TRIed”