Cinco de Mayo couldn’t have come at a better time. Although I haven’t indulged in the obligatory libation (yet), I have a belly full of tacos and am coming back to life after a punishing weekend of heat, hills, and more hills at Wildflower. This is a long post – probably my longest to date, but also one that marks a significant milestone in my race experience.

5 hours of sleep – ready to crush!

Summary: As I posted last week, racing the Long Course this year came with a disclaimer – I couldn’t get hung up on time. When I raced in 2012, I spent 16 weeks of almost uninterrupted training focusing on a PR at what was one of two A-races for the year. I trained in heat, did a ton of brick workouts, rode the actual bike route and ran on the course to name a few. After initially deciding to register for the Olympic, my Ironman coaches urged me to go for the Long Course so that I could accrue some early season volume and practice racing in the heat before Vineman 70.3 – one of my two A-races this year. I toed the line on Saturday after training for 12 weeks – of which only 6 didn’t feature work travel. There were a lot of positive takeaways – some negatives, and many lessons learned in the past 48 hours. Without further adieu – here’s how it went down on Saturday:

Spoiler alert: I finished in 6:38 – almost a full hour off my half Ironman PR of 5:44, 23 minutes slower than my first 70.3, and 40 minutes slower than my 2012 Long Course race…and it’s ok. In short – Saturday’s race absolutely crushed me: I blew up on the bike. Due to the heat and the nutritional challenges it posed, I seriously considered taking a DNF after the bike but bounced back to finish strong. 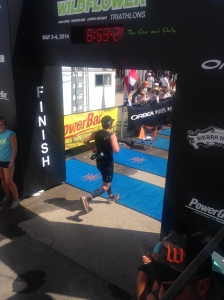 Proof: I made it!

Swim: The much hyped swim venue change certainly introduced some logistical challenges this year. After setting up transition 2.2 miles away, athletes were shuttled down to the swim venue with running shoes and gear bags in tow. After the swim, racers ran back to the transition area and hopped on the bike; the transition run was ultimately deducted from the total run distance.

That said, the swim was fairly straightforward, except for the fact that I forgot my goggles! I realized it moments before I got on the shuttle, but lucky for me, Sports Basement came to the rescue once again and hooked me up with a new pair just before the final shuttle left for Harris Creek. I hopped on the shuttle, regained my composure, and hopped right into my wave in time for the start.

The start was a bit surprising – especially because I couldn’t see a thing! The water level was low enough to begin with, but disruption from thousands of athletes meant that the shallow swim start translated to opaque water – the first 100 yards were like swimming through tar. Once I hit the first buoy, I opened up my stroke and calmed down with plenty of time to spare.  I felt extremely strong and knew that I was having the best swim of my 70.3 career.  After turning the corner for the return trip to shore, I pushed within reason and clocked a 34 minute swim despite the difficulty sighting during the swim start and exit – 4 minutes faster than 2012, and 3 minutes faster than my second best time overall. It was an absolutely perfect start to the race, and I shot off to the transition run in full stride.

Posing on the infamous ramp before Taylor’s swim

Transition run: Disclaimer- I still haven’t uploaded my Garmin data yet and there isn’t a clear indication of how long I spent running on the results page. That said, it was another good effort before the main bike and run legs. Despite the very steep incline of the swim exit/boat ramp/transition run area, I managed to briefly sit down, strip my suit off and throw on my triathlon running shoes – Altra 3sums.  The beauty of these shoes is that they’re designed for sock-less use and even have drainage holes in the sole; they also have quick draw laces to save precious time in transition. Once I was equipped, I shot off on the trail and spent approximately 20 minutes changing and then running 2.2 miles – I felt great.

It was realllly hot out there!

Bike: 56 miles, unrelenting terrain, and extreme heat. I always go for the hardest races, and it was only a matter of time until I paid the price. I didn’t expect it to happen on Saturday due to my current fitness level, preparation, and familiarity with the course, but it did – in a big way. The ride started off as expected – I powered up the first substantial climb out of transition almost effortlessly and passed many people in the process. I had a lot of space ahead and saw very few riders – I was well into the top half of all racers following my swim, run, and first climb. Then it happened: it was almost like someone turned the thermostat to 100 degrees.

As soon as I hit direct sunlight, I felt my core temperature creep up and my power output decrease. I stuck to my nutrition plan – roughly 300 calories per hour with increased fluid and sodium intake. The first hour was average – I hit the hour mark with just over 18 miles in the books, but maintaining my pace started to become difficult around mile 20. By the time I hit the headwinds, crosswinds, and rolling hills (mountains) between miles 20 and 35, I could safely say that I was already struggling and felt my hamstrings beginning to cramp. I started to spend less time in aero – something I’ll come back to later in the recap, and just focused on managing my skyrocketing heart rate in the heat. I hit the two hour mark with roughly 37 miles in the books – something I felt very good about under the circumstances.

Desperately trying to get back on track before the run

After a brief surge between miles 36-41, the infamous Nasty Grade made its presence felt: all 5 miles and 1000+ feet of climbing. While I was climbing, both the thermometer and my heart rate followed suit – I soon experienced cramping in my quads too. By now, I had cramped in my hamstrings and quads and my power output dropped significantly. I rode as easy as possible and used it as a time to replenish my sodium, fuel, and hydration needs – none of which did the trick: I was too far in the hole.

I powered through the final 10 miles of rolling hills and prepared mentally for the strenuous 11 mile trail run in scorching heat that was only minutes away. I ultimately clocked in at 3:22 – a decent effort under the circumstances, but far off my 3:06 bike split in 2012. After dismounting my bike, I immediately knew that I was in serious trouble. I was very dizzy, thirsty, and disoriented – telltale signs of dehydration and the early onset of heat stroke. I ate and drank as much as I could keep down hoping that it would do the trick and make me snap back to life – it didn’t. I spoke with Taylor briefly about taking a DNF and she was obviously concerned by my appearance. I ultimately decided to start the run leg by walking in an attempt to let digestion take its course.

One shoe untied and the other foot heel striking: proof that I was cashed. Finishing as strong as I could.

Run: The run leg was not looking good from the start: I spent almost 20 minutes in transition before I regained my composure. Taylor broke the news that Jesse Thomas bagged his 4th consecutive Wildflower Long Course victory after a year on the sidelines – something that really blew my mind and ultimately pushed me out of T2. We also met briefly after the race – he’s a super cool guy, has a great first name, and really crushed it this weekend by capping a truly inspirational comeback.

I walked out of transition for maybe the first time ever and up the first hill – another first.   Jogging started on the descent, and my legs were starting to come back. More importantly, I felt the need to pee again – which meant that my body was responding well to my last ditch hydration effort in T2. After getting sprayed by hoses and kids with water guns at the first few aid stations, I felt my legs come back and broke into a solid running pace. My moving pace was between roughly 7:45 and 8:15 – right where I want to be at Vineman 70.3. I walked the big hills and whenever I felt my heart rate skyrocket, eventually finishing the “run” in 2:13 – 12 minutes slower than my 2:01 in 2012.

The finish: Adding up the sum of the parts, I clocked in at 6:38. My primary splits were 34 swim, 3:22 bike, and 2:13 run – not a bad effort for Wildflower, especially when a PR wasn’t my primary focus. I finished the race very strong and ran the last three miles at pace – my fastest mile of the run was mile 13.

What does this all mean?

For starters, it’s not time to push the panic button. I will write a separate post where I revisit the goals I laid out last week and analyze my performance on Saturday, but in short – I hit almost all of them. The time is obviously disappointing, but it was a different race than 2012 under a different set of circumstances.