Saturday was practically perfection for Jesse and me. Despite waking up early and not sleeping much (my Jawbone Up reported about six hours of sleep), we seized the day, running a half marathon with aggressive elevation while enjoying the perfect 70 degree temperatures.

Before the race start.

After returning home and drinking a recovery smoothie, we spent a few hours being lazy and watching House of Cards. When we were ready for a real meal, we ventured out to a new Indian restaurant in our neighborhood. Total cost: $23. 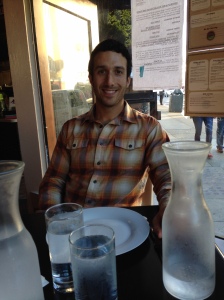 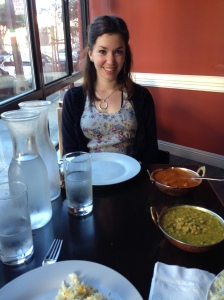 Post-saag and daal, we checked out a new beer bar on Polk Street near our apartment, Woods Polk Station. Ran by the same people who own Cervecería de MateVeza in the Castro, we were excited to get our Mate Veza IPA fix. Infused with yerba mate tea, the slightly caffeinated, hoppy beer is absolutely delicious, particularly on draft. Total cost: $28.

After $5 spent at Loving Cup for some well-earned rice pudding, we headed come and crashed after a day well spent.

On Sunday, Jesse and I spent a gorgeous and fog-free afternoon biking in Golden Gate Park, taking advantage of the Sunday closures to motor vehicles. 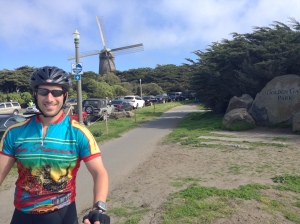 At the Ocean Beach end of Golden Gate Park.

I may complain about waking up early to an alarm on Saturday morning, but I’m always happy I did it.

6 thoughts on “Recipe for a Fun (and Cheap) Weekend”