As we recently posted, our plans to run a trail marathon on Jesse’s birthday on September 15th were derailed by the Morgan Fire on Mt. Diablo. Now that the fire is extinguished, Coastal Trail Runs has rescheduled the Diablo Trail Marathon for Saturday, October 5th. This would work just fine except for one small thing: Jesse and I are registered to run the Bridge to Bridge 10K the next day on Sunday, October 6th.

The race organizer is offering an 80% off code for any other race through next year for people who can’t make the October date. Unfortunately, we can’t make the rest of the 2013 dates work due to other race conflicts and work travel. So, that would leave October as the marathon date unless we delay our discount code until February. February would align well with our other races planned through the first half of 2014, but we’re impatient and want to run a trail marathon sooner rather than later. 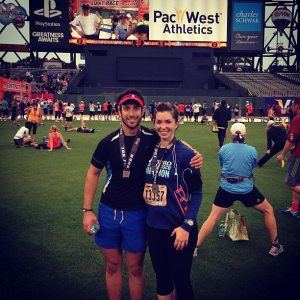 Being the stellar endurance athlete (aka masochist) that Jesse is, he immediately suggested we simply run the trail marathon the day before the 10K. This would work because the 10K isn’t an “A” race – we registered to complete the San Francisco Original Runs Series.

1 thought on “To marathon or not to marathon, that is the question”