San Francisco is ripe with running routes for your every running need. From flat pavement to hilly trails, Jesse and I can always concoct a route that will serve our needs. We live on the base of Russian Hill, just above Aquatic Park, so our morning routes usually take us towards the Golden Gate Bridge through the Marina or towards AT&T Park on the Embarcadero.

Golden Gate Bridge, one of many beautiful sights on this route.

Aside from the hill at Fort Mason and the hill leading up to the Golden Gate Bridge, this route is completely flat and one of the most scenic in the city. Classic views of the bridge, Alcatraz, Angel Island, and the cityscape (on your way home away from the bridge) keep this paved and dirt route entertaining. Beware of the headwind on your way out – it can be particularly brutal in the evenings. This route gets packed with tourists and tourists on bikes, which is even more scary. America’s Cup also makes this route a bit packed on the weekends. From our apartment to the Golden Gate Bridge is a seven-mile round trip.

One benefit of being an early bird on the Embarcadero: sunrises over the Bay Bridge.

One benefit of being an early bird on the Embarcadero: sunrises over the Bay Bridge.

From Fisherman’s Wharf to AT&T Park, the Embarcadero is another very scenic, flat, and completely paved route that is popular among the tourists. Starting from Fisherman’s Wharf, at Jefferson and Stockton, the route takes you by landmarks like Coit Tower and the Ferry Building, as well as popular recent additions that attract hoards of tourists, including the Exploratorium and the America’s Cup pop-up shop/concert venue. Running to AT&T Park and back is about a six-mile round trip from the base of Russian Hill. The Embarcadero extends down towards Dogpatch/Bayview when it turns into the Bay Trail. Jesse and I did and 18-mile run towards Hunter’s Point, so your running opportunities definitely extend southward.

More of a jaunt from our apartment, the Presidio and Golden Gate Park are two other excellent running options. 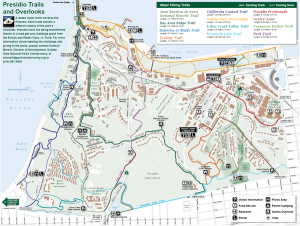 Trails in the Presidio expand your running horizons.

The Presidio is a great place to try trail running. Jesse and I usually run on the Park Trail, which takes you by the cemetery and the golf course, but there are dozens of miles to explore. This trail gives you a break from the constant pounding on pavement while remaining challenging by gaining hundreds of feet in a short (two mile) distance. The Presidio offers shade for those avoiding the sun (like me), a mix of paved and dirt trails, and beautiful views of the Richmond and the west side of the Golden Gate Bridge.

The Presidio looking towards Chrissy Field.

Running in the Presidio feels like you’re running in a remote forest when really you’re minutes away from a major city. One major perk: the Presidio lacks fewer tourists than most every other running hub in the city, so you won’t be constantly dodging families with strollers or questionable bike riders.

Designed after Central Park in Jesse’s former home of Manhattan, the outer loop of Golden Gate Park is six miles. Within the park, paths and trails without clear signage let you get lost in the middle of San Francisco. Several race routes I’ve experienced, including the Kaiser Permanente Half Marathon, Bay to Breakers, and the San Francisco Marathon (twice), take runners through Golden Gate Park, and for good reason: the varied terrain and ability to loop around several paths gives runners the variation in elevation and scenery they need.  Golden Gate Park is deceptively hilly (especially on the San Francisco Marathon route). The park is beautifully landscaped and is home to many famous landmarks: the De Young Museum, Conservatory of Flowers,  the Windmills, and the Japanese Tea Garden, among many others. You can extend your run in Golden Gate Park down Ocean Beach towards Fort Funston, which makes Golden Gate Park a great spot for long marathon training runs. 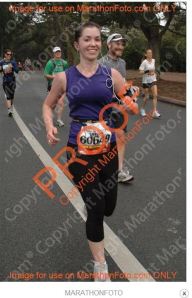 Where ever you decide to run in San Francisco, you’ve picked a great location: mild weather, hill training, beautiful views, and a strong community of runners makes San Francisco the ideal running city.